Our special correspondents report from Kazakhstan

Nursultan Nazarbayev's museum in his native village of Shamalgan was nearly looted during the recent unrest in Kazakhstan. Local residents, who united in the national squad, managed to defend the historical and cultural center “Atameken”. The most valuable exhibits were placed in a special storage in advance. 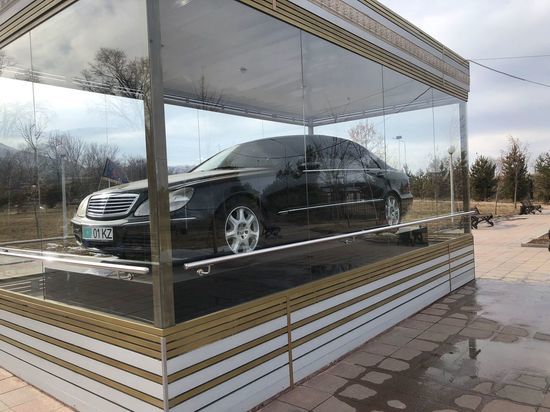 Presidential limousine of Nursultan Nazarbayev of 2001 in the museum of his native village is placed in a glass cube Photo: Svetlana Samodelova

Residents of Shamalgan told us that Nursultan Nazarbayev came to his native village on January 2, apparently, he spent the night with his brother – Elbasy's younger brother Bolat and sister Anipa have houses in Shamalgan and live there. Then Nazarbayev left for Kyrgyzstan (3 hours from Shamalgan to Bishkek) and flew to the United Arab Emirates. Read about it in our report.

The foothill village of Shamalgan, where the first President of Kazakhstan Nursultan Nazarbayev was born and grew up, is quite large. It is 8 kilometers to the district center Kaskelen, and about 50 kilometers to Alma-Ata. The car does not go along a good road, but flies. No patching for you, let alone potholes.

Shamalgan can hardly be called a village, rather, it is a well-maintained town with five schools, a modern sports complex, a cultural center, two supermarkets, and a large fruit store. Two streets in the village – Alzhan-ana and Abish-ata – are named after the parents of the first president of Kazakhstan. As the locals say, not everyone can afford to buy a house here. They are twice as expensive as the national average. The residents are very creative. For example, we saw a car wash, where the inscription was attached to the facade: Abu Dhabi. No wonder they chose the name of the capital of the UAE.

The gas station in Shamalgan is called the capital of the United Arab Emirates Photo: Svetlana Samodelova

A large area has been given over to the Nursultan Nazarbayev Museum. In official documents, it is designated as the historical and cultural center “Atameken”. The center was built in 2017, when Nazarbayev was still the current president.

In the foyer, we meet with the eyes of Nursultan Nazarbayev. Elbasy's portrait is very unusual. It is made of spectacle frames with diamond inclusions and miraculously repeats the features of the first president of Kazakhstan.

“Look closer,” senior researcher Alpamys Abu urges us. — Behind each lens of the mosaic are portraits of batyrs that live in people's memory.

One can imagine how much a painting commissioned from the American artist David Datong cost. It is only known that it was presented to the President's Foundation on behalf of the akim of the then South Kazakhstan region.

The building of the Nazarbayev Museum in Shamalgan looks stylish Photo: Svetlana Samodelova

— Yes, he visited our museum twice, the last time was in 2019. Each time he expressed his gratitude for the fact that people honor him in his native village.

– This initiative was made by classmates of Nursultan Nazarbayev. The money for the construction of the complex was allocated by patrons, including bankers.

The museum has a model of the house that Nursultan Nazarbayev built together with his shepherd father. His mother was from a mullah family. Nursultan Nazarbayev has two brothers and a sister. The eldest of the Satybaldy brothers is no longer alive, he died in 1981. His younger brother Bolat, who became one of the richest people in Kazakhstan, and his sister Anipa live in Shamalgan.

The house where Nursultan Nazarbayev grew up burned down in the early 2000s due to a short circuit in the electrical wiring. Nobody dared to approach the burning house, because video cameras were installed everywhere. 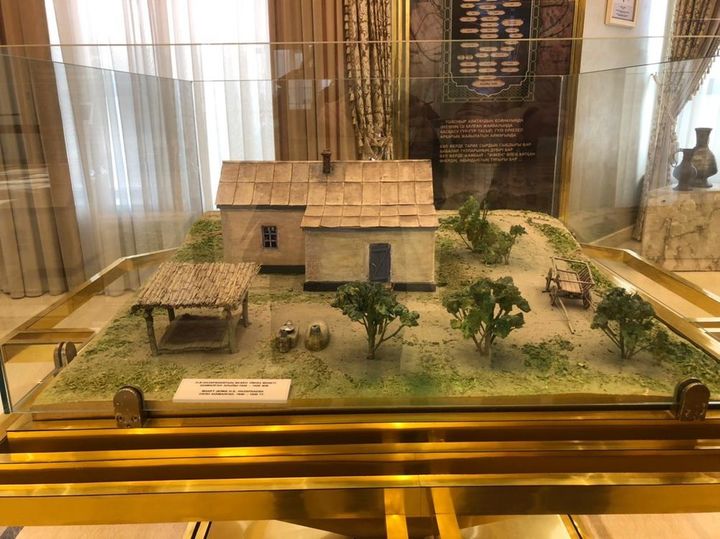 Model of the house of the Nazarbayev family in Shamalgan. The house itself burned down Photo: Irina Bobrova

A separate stand is dedicated to the genealogical tree of the Nazarbayevs.

We are told that a person hides his origin only in two cases: if he really does not know his mother and father, and if his father was a horse thief or a robber, the guide explains.

As it turned out, Nursultan Nazarbayev, as a child, knew by heart 12 generations of his ancestors, among whom were Karasai batyr, a participant in the Dzungarian battles, and Bolek batyr, who led a thousandth army. 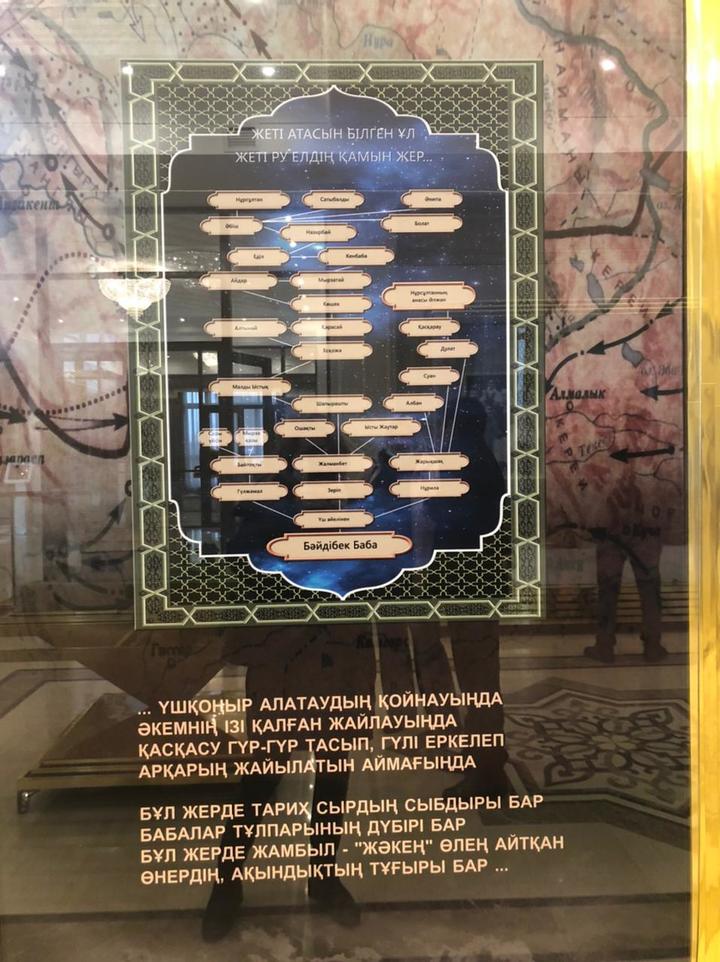 Nursultan Nazarbayev's mother Alzhan was known as the best singer in the village, she also became famous as an improvisational poet. She often organized and led holidays. Nursultan inherited her oratorical and musical abilities from her mother. The villagers say that he played the button accordion and dombra very well. In order to buy a button accordion, all summer he sculpted clay bricks for his neighbor, who built a house. With the proceeds of 32 rubles, I bought an instrument and a tutorial for playing the button accordion. I taught myself how to play it. The whole street gathered at their house to dance the foxtrot. Loud music disturbed neighbors. And the father of Nursultan Nazarbayev even threatened to cut the accordion. Then he and the guys began to leave to dance outside the village, where the corn fields began. 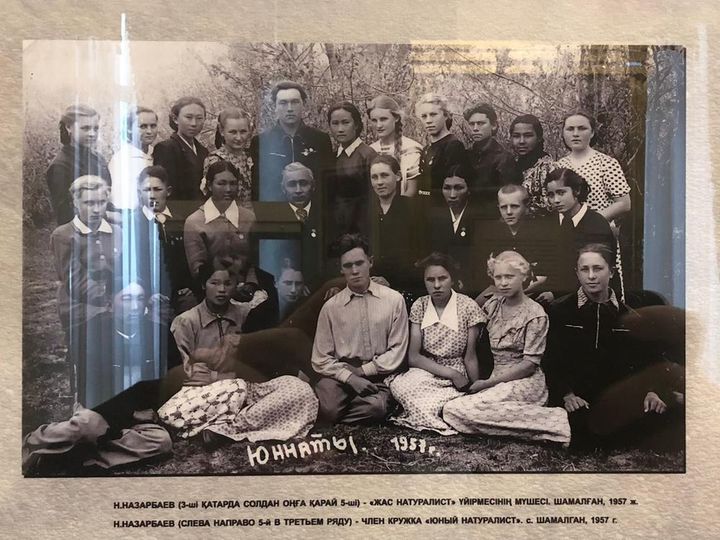 Having put together a propaganda team, Nursultan Nazarbayev traveled with his Komsomol friends to give concerts in neighboring villages, where, along with songs, he also performed Russian folk ditties. According to the recollections of classmates, he waltzed well, and the girls often queued up to dance with him.

Near the house of the Nazarbayev family, a large apple orchard was planted. They took care of the trees in such a way that they always had the largest harvest of apples. 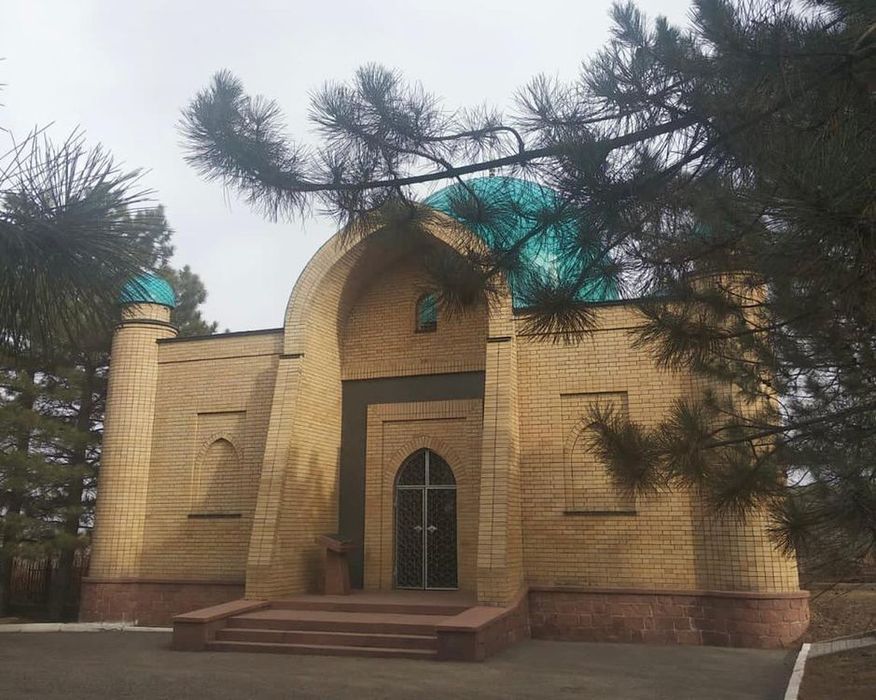 According to the recollections of old-timers, in the 1940s, the Nazarbayevs sheltered the Tumenov family in their house, who were deported from Karachay-Cherkessia.

— As a token of gratitude, the champion of Russia in army hand-to-hand combat Albert Tumenov presented his belt to the museum. Nursultan Nazarbayev's younger brother Bolat received him in the village and accompanied him. Representatives of 17 nationalities live in Shamalgan, and now everyone supports each other.

“The villagers and I ourselves guarded the building of the museum. The most valuable things belonging to Nursultan Nazarbayev were immediately removed. We have a good vault with safes.

— About 20 people drove up in a car to the gate. Our residents, who united in a squad, came out and explained to them that this is a protected facility, and it would be better for them not to try to enter its territory.

— No, in our village everyone knows that there are video cameras around the entire perimeter of the museum. These were visitors. Who they are – we can only guess.

– The museum must be preserved, this is our history. In addition, there are not many cultural places in Shamalgan. Why remove it?

The cult of Nazarbayev's face: the museum of the first president of Kazakhstan turned out to be luxurious