Listen to the story. 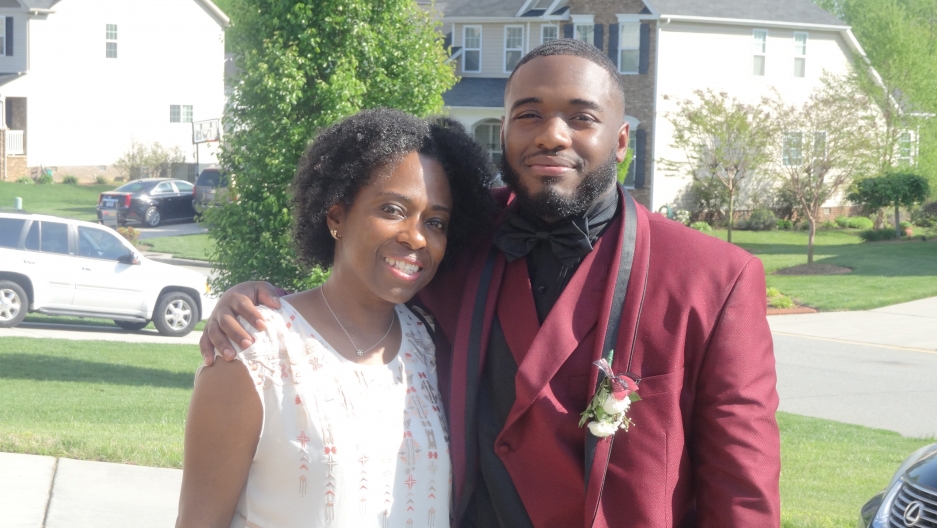 Nodia Mena and her son, Brayan Guevara, talk about everything, but especially race and politics.

This story is part of “Every 30 Seconds,” a collaborative public media reporting project tracing the young Latino electorate leading up to the 2020 presidential election and beyond.

Arkansas Gov. Bill Clinton and California Gov. Jerry Brown Jr. are both at Lehman College in the Bronx, New York, debating about education in urban America and sparring over tuition affordability — and gun control — just before the Democratic Party’s presidential primaries.

Related: This young Afro Latino teacher and voter wants to be a model for his students

It’s pandemonium outside the college and all Nodia Mena can do is soak it in.

“I don’t know anything about US politics, but it was such a huge enthusiasm,” she said. “Someone invited me to go around, we couldn’t even get into the event. I mean, it was so many people, so many cars, and that was all new for me.”

This experience was Mena’s first introduction into American politics.

Mena is Afro Honduran and moved to the US nearly 30 years ago. She left Honduras when she was 19, but was able to vote for the first time before leaving.

She said the lack of change in her country led her to not take voting seriously.

“It was always whoever got into power will always do the same thing, they may have relied on corruption and so on. My very first vote was a rebellious vote. I voted for the least likely to win the party. I just felt like it didn’t matter, like we didn’t count. As a Garifuna, a Black woman in Latin America, my vote didn’t matter.”

“It was always whoever got into power will always do the same thing, they may have relied on corruption and so on,” Mena said. “My very first vote was a rebellious vote. I voted for the least likely to win the party. I just felt like it didn’t matter, like we didn’t count. As a Garifuna, a Black woman in Latin America, my vote didn’t matter.”

Related: How a trip to Honduras shaped one young US Afro Latino voter’s identity

However, after seeing the enthusiasm toward politics in 1992, Mena started to take it more seriously and researched politicians and how the US government operates. The more she researched, the more interested she became.

In 2008, that feeling intensified.

Then the Democratic presidential candidate, Barack Obama, ran his campaign on the slogan, “Change we can believe in,” and the chant, “Yes, we can.”

“It wasn’t until Obama when I really started paying way more attention to what was going on,” she said. “The fact that he was there as a Black man, but his message, the way in which he connected with people, how generally he presented himself to people, it resonated with me personally.”

Mena canvassed for his campaign and made sure she connected with the people she spoke to, to encourage voter enthusiasm.

“I realized that we needed to, as Afro descendants, get involved with the decisions that are being made for us,” she said.

Her Afro Latina identity puts her in an interesting dynamic when candidates try to solicit her vote. Mena said candidates usually either go for the Black vote or the Latino vote, but never the Afro Latino vote. However, the fact that candidates don’t reach out to Afro Latinos isn’t an issue for her.

“I don’t think politicians should continue to think about people as ‘this is Indian,’ “this is Black,” ‘this is Latino,’” she said. “I think that this is the time where we should strive towards equity.”

“I don’t think politicians should continue to think about people as ‘this is Indian,’ “this is Black,” ‘this is Latino,’” she said. “I think that this is the time where we should strive towards equity.”

As a Spanish-language instructor at the University of North Carolina at Greensboro, Mena makes sure that she informs her students about Afro Latino history.

“In Latin America, that solidarity is nonexistent, as far as the non-Black Latinos with the Black Latinos. As a matter of fact, when you say Latinos, it does not include me in that group. You have to specifically say, ‘Afro Latinos.’ Why?”

These questions about Afro Latino solidarity with Latinos and African Americans are questions that she poses with her son, Brayan Guevara. The two of them, along with his other siblings, talk about everything, but especially race and politics.

“She’ll always have MSNBC or something on and she’s the type of person that always wants me to make up my own mind,” he said. “She never really told me, ‘Hey Brayan, you need to be a Democrat.’ She will always just try to ask me my opinions on things so I can be informed.”

Guevara is a sophomore at Guilford Technical Community College, where he is studying to become a teacher. He’s a first-time voter.

It took him a while to embrace his Afro Latino identity, but now that he has, he sees the importance of having teachers of color in the classroom, much like his mother.

“How teachers treat Black kids, which I have experienced in my time — it’s just the stigma that they already have for these kids,” Guevara said.

As Guevara and his mom navigate through this year’s election, he has no issue stating that Mena has been a big part of his political journey.

“She’s the only influencer I’ve ever had,” he said. “I don’t really look up to anybody else.”